Contamination of recyclables is a costly issue for Blue Box recycling programs province-wide. In communities like the Region of Peel, that have a sizeable MR sector, non-compliant packaging placed out for recycling can significantly burden sorting practices at the MRF and drive up costs.

Over the past several years, Peel Region staff have noted that in addition to setting out unwanted items in the Blue Box, residents were increasingly placing recyclables out for collection in tied off bags and using the front end loading recycling bins to dispose of their garbage. While the material inside the small grocery sized bags was often recyclable, the logistics involved in opening the small sacks and emptying their contents proved problematic for the MRF, and often resulted in the loss of most of those recyclables to residue.

The Region estimated that combined, these challenges were adding roughly $168K annually to the cost of its Blue Box program.

To address the problem, Peel staff implemented a region wide “Recycle Right” Promotion & Education (P&E) campaign in 2016. The overall goal was to reduce processing costs related to the MR contamination management while improving the capture and marketing of inbound tonnes.

The communication effort was a multi-faceted approach that aimed to get the ‘Recycle Right’ instructions out to residents through the frequent repetition of consistent messaging. While the calls to action were always the same, the medium used to deliver the messaging varied. This was done in an attempt to keep residents’ interest and to ensure engagement with a wide range of demographics. The Region’s instructional messaging was delivered through:

A Comprehensive Measuring and Monitoring Strategy

Controls groups were established as part of the measuring and monitoring strategy to study and understand the effectiveness of the different approaches (print materials versus in person interactions). This meant that some buildings received lobby display presentations and others did not. Results of the campaign were quantified through recycling audits and resident surveys for each participating site.

One of the learnings from the campaign was that lobby displays (a costly endeavour), where staff are onsite to talk with residents about their recycling program, appeared to have little impact on resident behaviour. When surveyed, it was the instructions found on the reusable bags, door hangers, magnets and posters that residents recalled and credited as the reason for the correction to their recycling behaviour. Before investing in lobby displays again, a more robust study is needed to fully understand their effectiveness. 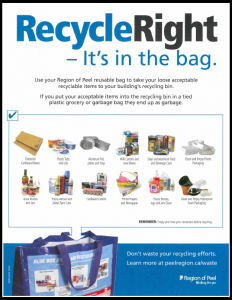 Segmented measuring and monitoring through the use of control groups is critical for this type of learning.  It allows for different approaches to be compared and contrasted so that insights into what most effectively drives behaviour change for various demographics can be understood. This in turn provides guidance for how to set your budget and how to best allocate your P&E dollars to better ensure a return on investment.

Municipal and First Nations Staff wanting to learn more about how to build an effective P&E campaigns can register today for CIF’s newest P&E course offered Tuesday May 1, at Lake’s View resort and spa (the day before the ORW).

Communications Specialist, Barbara McConnell, will join CIF staff member Carrie Nash for a day long session that looks at how to apply the fundamentals of building a P&E campaign for contamination abatement: one of today’s most pressing Blue Box issues in Ontario. The course will use case studies based on past municipal P&E campaigns to illustrate how to apply principles taught and to learn how to grow the successes achieved in other Ontario communities such as Peel.

Back to CIF Connections